In the first quarter of 2019, the labor force figures increased in southeast Michigan while employment remained stable. The growth in labor force combined with minimal change in employment caused the number of unemployed individuals to increase in the region. The unemployment rate rose from the 4.0 percent quarterly rate in Q4 2018 to the current rate of 4.3 percent in Q1 2019.

“The labor force continues to grow in southeast Michigan, increasing by 24,850 individuals in comparison with the 2018 annual figures and the year-to-date levels through March 2019,” said Workforce Intelligence Network Executive Director, Michele Economou Ureste. “Demand often grows toward the end of the year and experiences a slight decline into the first quarter, a pattern already emerging for the 16-county WIN partnership region.” 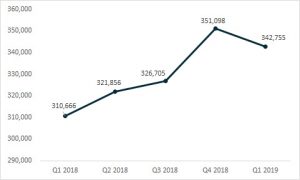 While employer demand for most occupation groups analyzed by WIN fell somewhat into Q1 2019, the education and health care groups both reported growth in postings; education employers posted nearly 18 percent more advertisements in Q1 2019 than Q4 2018, with health care postings growing by 11.4 percent. The customer service occupation group continued to report the highest demand, with over 74,000 job postings during the quarter.

While only 57 percent of job postings identified a minimum education level, nearly a quarter (23.8 percent) of the 342,755 jobs posted in southeast Michigan indicated the need for candidates with a bachelor’s degree. 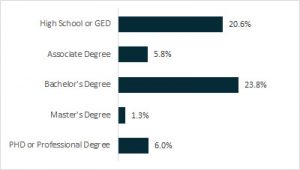 “The education and health care groups continue to push the need for a bachelor’s degree,” said Michelle Wein, senior research manager at WIN. “Six of the top twenty entry-level jobs and eight of the twenty overall occupations typically require a bachelor’s degree for entry.”

About a quarter of overall postings in the region, or 87,086 online job ads, were open to individuals with zero to two years of previous work experience. Many applicants of entry-level occupations, while not typically requiring prior training or some college, could benefit from taking some course work to develop the skills needed in the postings. Higher education attainment tends to lead to more lucrative opportunities, but many entry-level opportunities exist for each educational attainment level. 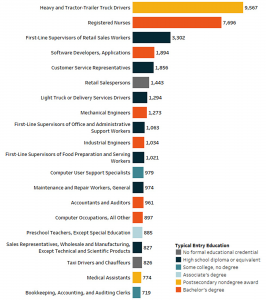 “It is a primary objective of WIN educational and workforce agency partners to ensure that the workforce receives training and education for in-demand job skills, including soft skills,” said Economou Ureste.

The full Q1 2019 labor market report for the 16-county region analyzed by WIN, as well as the City of Detroit, and WIN’s latest data and research projects and reports are available at www.winintelligence.org/data-research/labor-market-reports.